The big game of the forests of Somogy

The most characteristic and most well-known animals in the forests are the big game. In the majority of Hungarian forests, including Somogy, we find four typical species.

One of the most adaptive species of big game on the continent is the roe deer. It is widespread in almost whole of Europe, including mountains as well as plains. It prefers fields with patches of forests and areas with arable land or glades, and is often found in forest edges. The roe has a relatively small living space, if it finds sufficient food, it only moves within the boundaries of a few miles. Concerning its eating habits, it is rather picky. It likes energy-rich, juicy, easily digestible plants, fresh shoots or buds. It is a ruminant animal, which means it has to eat frequently, but only small amounts at a time. The male is called buck, the female doe, and their offspring fawn. The roebuck has short, steeply rising antlers. The mating season – the rut – lasts from the end of July to the beginning of August, and the offsprings are born only in spring or early summer of next year. As typical of herbivores, the newborns are up and running minutes after birth, however, they do not follow their mothers in the first few weeks, but rest in a sheltered place. If a hiker encounters a fawn that looks lonely, it should not be disturbed and under no circumstances should be taken home.

From an ecological viewpoint the wild boar is a so-called generalist species with a very wide range of nutrition and habitat. It prefers wet soiled groves, oak and beech woods, but it is also frequent in agricultural areas and reeds as well. It can easily became accustomed to the human environment and can also settle near populated areas. Its favourite dwelling places are neglected plots and orchards. The boar is an omnivore, it feeds on virtually everything from fallen fruits and seeds through insects to carcasses. It digs up the food from the ground with its snout, leaving a noticeable mark in the forest. Its eyesight is quite poor, but that deficiency is offset by excellent hearing and a keen sense of smell. The colour of the wild boar changes from black through brownish red to the colour of sand, while the piglets wear a distinctive striped coat. The weight of male boars can reach up to 250-300 kgs, and their hooked and sharp, ever growing tusks are considered dangerous weapons. Their mating – rutting – season is in November and December, the sows give birth to up to 10-12 piglets in early spring.

Among the deer species living in Hungary, a smaller animal is the fallow deer: does can grow up to 30-50 kgs, while bucks can reach weights of up to 80-120 kgs. It is easily recognizable by its rust-red coat speckled with cream-coloured spots, and the bucks’ shovel-shaped antlers. It is not an indigenous species in Hungary, but was introduced by the aristocracy in the Middle Ages from southern territories . It prefers open forests and groves. The fallow deer is not picky: it eats the stems and flowers of herbaceous plants, the leaves of shrubs and trees, oak and beech seeds, and horse chestnuts as well. They live in groups that remain together throughout the year, to which the bucks are only loosely attached for most of the year. Their breeding season is during the end of autumn, in October and November. During this period the bucks often emit loud grunting throat sounds. They carve shallow holes in the ground and wait for the does to appear while attracting them with their voices. The fawns are born six months later, in May or June.

The king of the forests of Somogy is the red deer. Adult bucks can weigh more than 200 kgs, and their antlers 10-15 kgs. It dwells in a wide variety of forests: originally it probably inhabited the floodplains of wetlands, but nowadays it is most common in plain and hilly forests sprinkled with clearings. As the red deer is sensitive to disturbance, it is unlikely to spot one near human settlements. It spends 4-5 hours during the day with eating, and the same amount with ruminating. It mainly grazes herbaceous plants, but also eats green shoots and buds of trees and bushes. In autumn, this deer eats a lot of acorns and from this energy-rich food source, gets prominently fat to survive the leaner months. During winter, it often chews on the barks of the trees, causing serious damage. The red deer lives in a community. Apart from the mating seasons, does and fawns, and bucks form two separate groups. The breeding season starts in September, this is the so-called rut. During this period, in the twilight hours once can hear the deep, loud voice of the bucks throughout the forest, attracting does and at the same time sending a message to their rivals to keep away. The strongest specimens keep a harem. The gestation period lasts 240 days, and the fawns are born in spring. Because of their rust colour and spots the fawns resemble the fallow deer. The bucks drop their antlers in January and Ferbruary and grow a new one the following year. 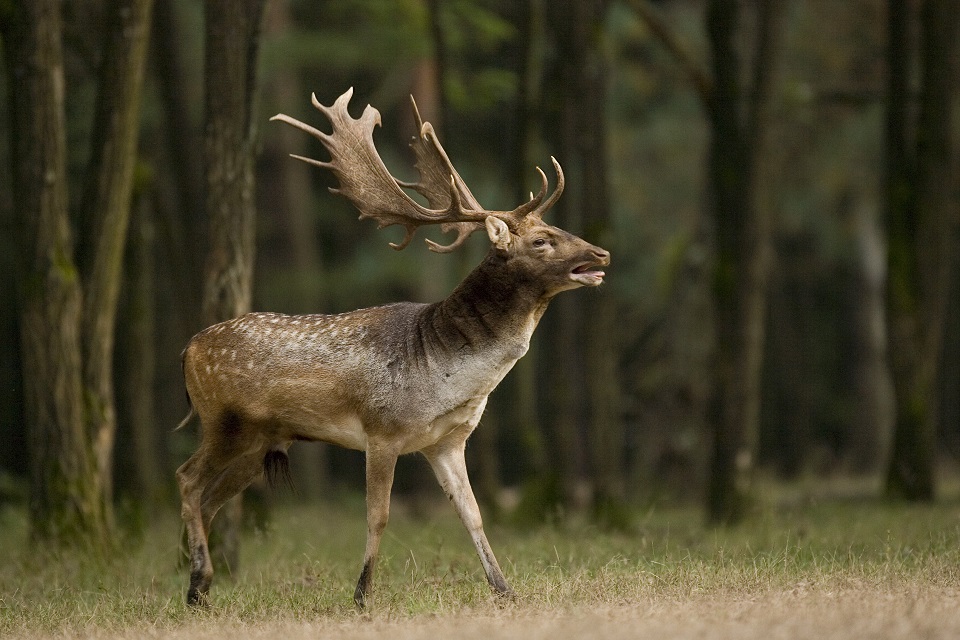 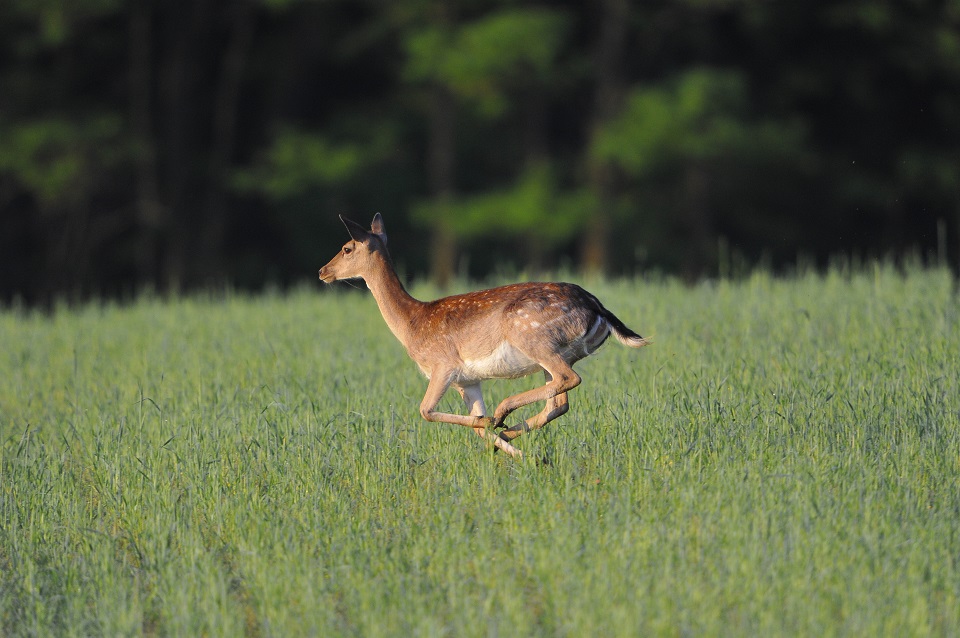 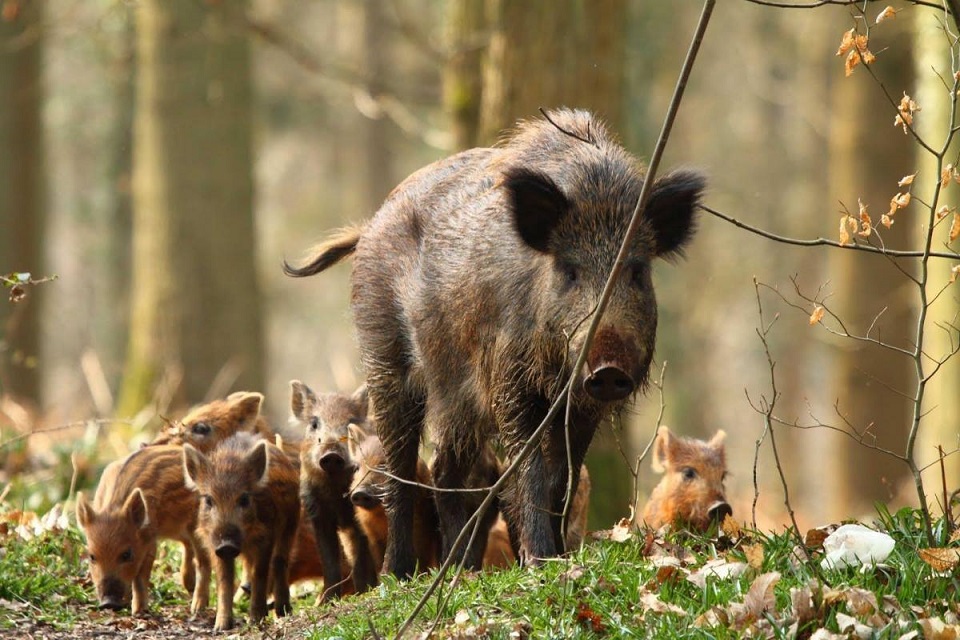 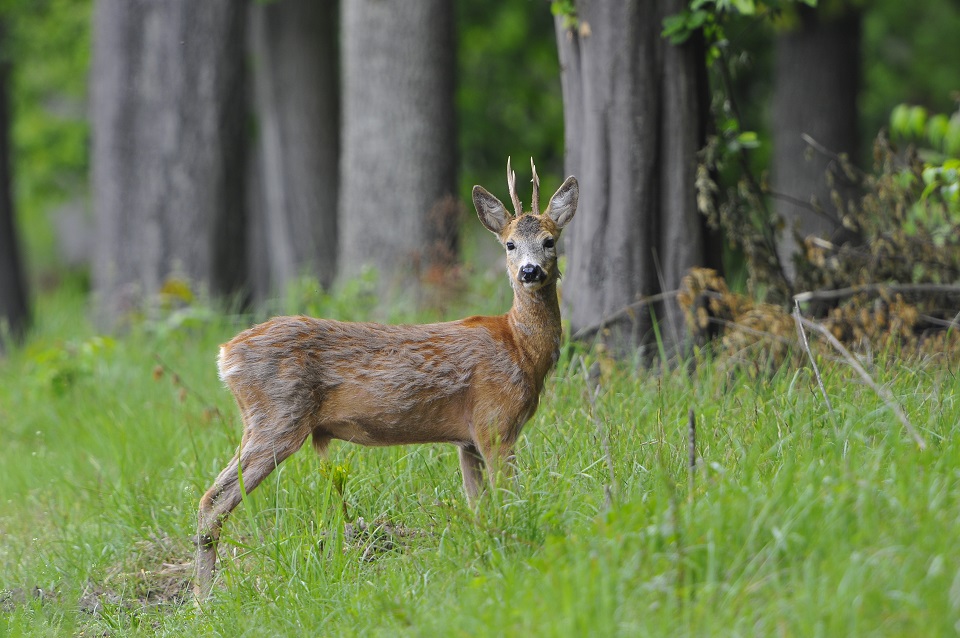 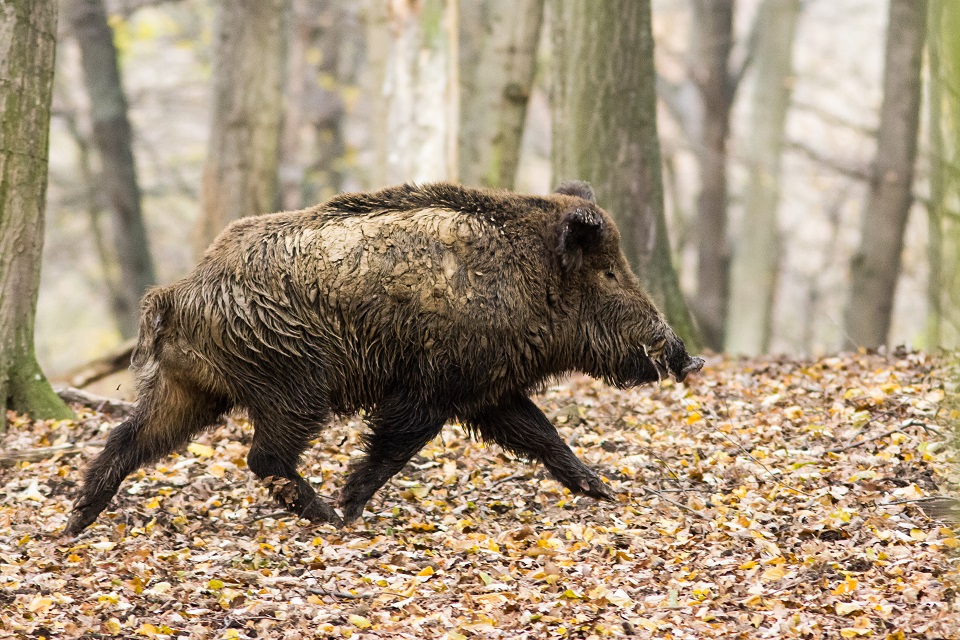